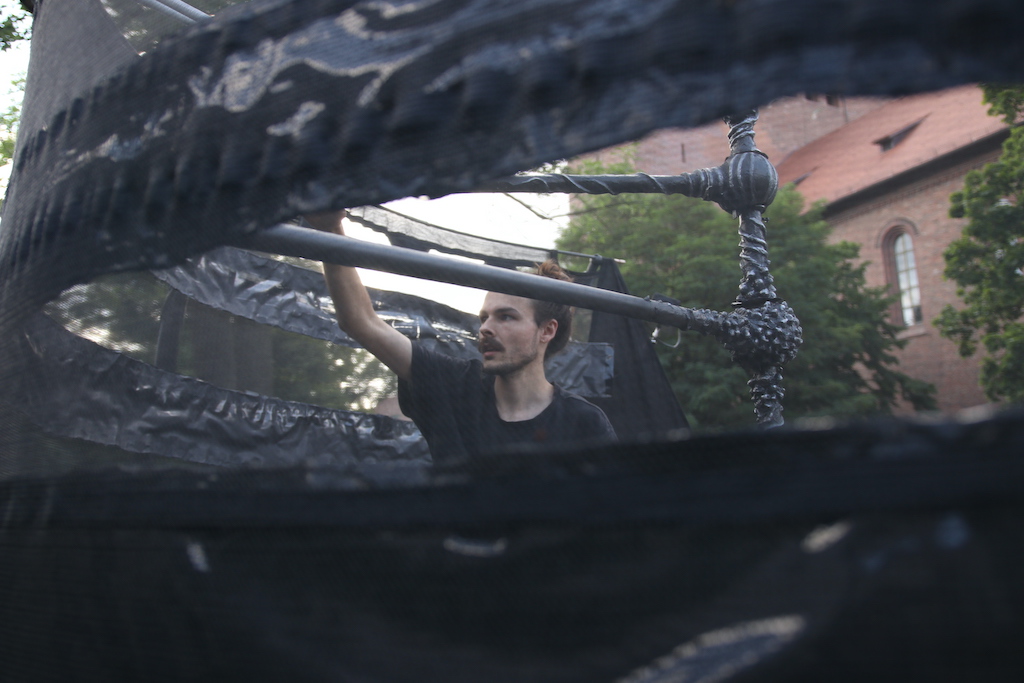 In spring 2021, the conceptual phase of the sound-sculpture begins. Through intense research we get inspired and present ideas to each other in Zoom Talks. The initial idea of a sound wall develops into a sound sculpture that can be experienced with the entire body. Now, in 2022 we continue the project with two accompanying field recording workshops.

The design is meant to be reminiscent of a turnstile, which usually symbolizes both a controlled entrance and a blocked path. Access is only possible with a valid ticket. Thus, entering various societies is linked to certain standards. The turnstile is rethought from access to passage, using the border as a playground. X-Spaces becomes flexible through its swivels. Each bar can be rotated 360° and opens, closes or breaks up spaces. Here one can experiment with captured sounds from the Südstadt of Nuremberg and make the turnstile dance. X-Spaces thus enables x-sounds at x-places in x-constellations.

Each stick triggers a sound by touch. We recorded the sounds ourselves and modified them via Ableton (program). We recorded atmospheric sounds, created sounds by hitting or moving objects, or simply spoke something in. Visit different places and try to actively perceive the sounds. What sounds stand out? What underpins the setting? Do certain sounds create a rhythm? Which object could produce an interesting sound? By moving the rod, the sound becomes softer or louder.

We transported the mobile sound installation X-Spaces by cargo bike and skateboard and set it up at different locations in Nuremberg.

At Annapark or at the courtyard of the Südstadtbad we were allowed to accompany the different reactions of the people. For some a playground, for others an auditive experience. Whether young or old, everyone experiences X-Spaces in their own way. Some rush headlong into the turnstile, wanting to get the full blast. Others move the bars with caution and want to find out where and when, what is triggered.

Thanks to all who encouraged and supported us: KommVorZone, Quartier U1, Nordgarten, dynamic acoustic research of the adbk, construction department of the State Theater and especially Clara Fischer.